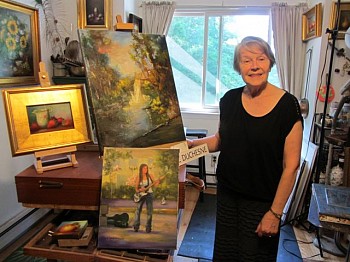 Mireille was born in Normandie, a Province of France so loved by the Impressionnists in particular Monet. She received a formal education at the Lycee of le Havre and the University of Rouen for a French master degree. Although, as long as she can recollect she always had a color pencil then a brush in her hands. Being an artist was not acceptable by her parents so beside her formal education she took evening classes at the Beaux Arts in Paris. As a former wife of a French expatriate she traveled much and was exposed to various cultures and different styles of art. When she moved to the United States of America she took classes at the Pastel Society of America in New York with Richard Pionk and also classes at the Art Students League in New York where she studied with, beside Richard Pionk, Gregg Kreutz, David Leffel and later at his studio Frank Arcuri.

She is a Signature member of the Pastel Society of America NY, an Artist member of Salmagundi Club and an active member of the Catharine Lorillard Wolfe. Mireille received numerous awards for her pastels as well as her oil paintings, among others at the Pastel Society of America, Salmagundi Club , The Catharine Lorillard Wolfe and the American Artists Professional league.

Mireille has been teaching at the Katonah Art Center for over 5 years. Much of Mireille's work is in the chiaroscuro style. This technique was favored by many of the old masters such as Charin, corot, and Rembrandt. Her paintings are in private collections throughout the United States, France, Italy and Japan.